Nine years ago today, I was in the middle of all this: 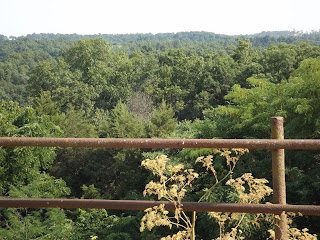 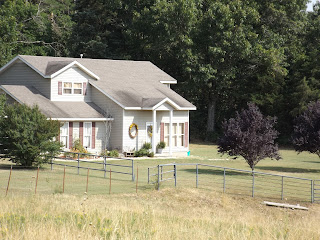 I would say it was a typical August day in northwest Arkansas, but according to weather underground it was a much cooler than normal 75-degree day.

Evil doesn't rest, though, and tragedy strikes even in the midst of joy and beauty. Around 7,000 miles away on the other side of the world, my brother was killed. Look over here if you want to read that story, because this one takes a little different turn.

Fast forward a few weeks, to when the shock was starting to wear off. My brother was gone, and I was mad. Not at the war or at the man who killed him--war brings death as part of its natural order, and the man who shot my brother was, to me anyway, like him in the fact that he was a soldier--albeit the enemy--fighting for his beliefs.

I wasn't mad at God, not really. Pop was. He had made a promise that he would never talk to God again if He ever took one of us kids, and for a while that was the case.

I wasn't mad at the government like so many others seemed to be, the people on the outside looking in and trying to place the blame somewhere. Outsiders would talk about how President Bush should never have gotten us involved in Iraq in the first place, but that wasn't how I felt. Michael died fighting for what he believed in, trying to bring freedom to a people who were being oppressed and tortured by the man who called himself their leader.

I was mad at my brother.

I can't tell you exactly what I was mad about, other than the simple fact that he left me. It wasn't like I thought it was his choice or anything, but that didn't change the fact that my protector
my confidant
my self-defense instructor
my defender
my pesterer
my big brother had left.

That's what I missed--and still miss--the most, the teasing. How crazy is that? I miss being annoyed and picked on by my big brother.

I can't tell you how long I was mad at him. There wasn't a sudden enlightening moment that I can pinpoint and say, "Right there. That's when I realized I was being dumb." Instead, over time the anger melted away. I guess it's hard to stay mad at somebody you miss so much.

I would say that nine years ago was the last time my family was whole, but that isn't exactly true. Nine years ago I had my brother, but I didn't have my kids and my little sister didn't have her husband. Nine years ago, a hole was torn in our family that won't be fixed until we all meet again in Heaven, but our family has continued to grow since then.

Because you see, just as tragedy strikes in the midst of joy, beauty shines through despite the pain.

I still miss my brother--I always will. It stings a little when my kids ask about him because I know there's nothing I can say that will ever compare to them having their uncle here to pick on them. When other people are congratulating me for something, like my book, I long to hear Michael teasing me. I miss his crooked grin. When everything seems to be going wrong (as is the case right now, to be honest), I wish I could hear him telling me everything will work out.

Looking back over what I've written, I have to apologize. It's a bit disjointed, something that really isn't usually the case with my writing. I guess it's because even now, 9 years later, I still have trouble processing everything. That's why any time I've written about my brother on here it has come out a bit messy, I guess. I could go back and edit everything, make all the loose ends come together, but somehow that doesn't seem right. Life and emotions and families are messy, so I think that's part of my story.
at August 15, 2013 No comments:

Okay, so this is the third time I've started a post for today. There are so many thoughts and emotions flying around in my head, but I c...