Early in the morning on the 4th of July, I woke up with a familiar tightening of the muscles around my stomach. They weren't intense, but I knew what I was feeling--contractions. I waited for a while before I told Nathan what was going on because I knew it was still early. After a couple of hours, though, we made arrangements to drop off our oldest with family and made our way to the hospital. Once there, the nurses hooked me up to a monitor. They read my contractions and watched me for a little while, then told me that the monitor must be off because I should be reacting more (insert major eye roll here...). They sent me home, saying they would see me back in a few days.

I didn't argue, but I knew I would be back much sooner than a few days. We called our parents to let them know what was going on, then picked up our daughter and headed home. My parents came down and spent the day with us. We hung around the house all day while my contractions got stronger and closer together. That night, we watched fireworks on t.v. while I held Nathan's hand, squeezing more and more as the contractions got more and more intense. Just before midnight, we made the trip back to the hospital. The labor pains were so intense that I couldn't decide which would help more--I alternated between telling Nathan to speed up to get me there faster and telling him to slow down because the bumps in the road were unbearable.

I remember the events, but I'll be completely honest--the pain I felt then that was so intense I couldn't think straight? I barely remember it now. The miracle that came after the labor is what I remember: the baby boy who was 8 pounds 14 ounces (he looked about 3 months old and dwarfed the 5 pound baby he was next to in the nursery) with big soft cheeks and big blue eyes. The pain of labor pales in comparison to the wonder and beauty of what came after.

In Matthew 24, Jesus warned His disciples about the last days. He told them about the wars, rumors of wars, violence, famine, and earthquakes that will come. He told them that His followers will be tortured, hated, and killed for their belief in Him. Those days will be dark--when love grows cold, people turn away from God, and the only thing that grows is wickedness. He warned of a day when the sun and moon will be darkened, when the stars will fall from the sky, and when all the powers of heaven and earth will be shaken.

Like many others, things happening in the world right now lead me to believe that we are quickly approaching that terrible tribulation that Jesus said will be unlike anything ever seen on earth. Those are dark, scary days. They are days that promise torture, death, and destruction. They are days filled with incredible pain, both physically and emotionally.

But Jesus said something else: "All these are the beginning of birth pains." (Matthew 24:8)

All that painful, hard stuff is undeniably in our future. Whether it comes in our generation or not, I don't know. If I don't face it, though, I really think my kids will. It will be unimaginable. It will be horrible. It will be painful.

And the miracle that comes after will make the pain pale in comparison. 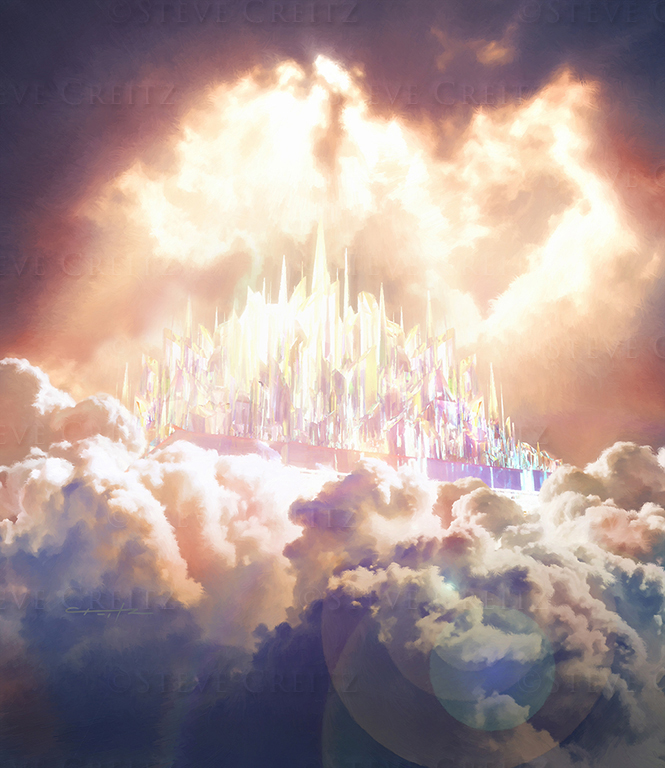 15 My guide held a golden measuring rod. With it he measured the city and the gates and the walls. 16 And the city is laid out with four corners in a perfect square, the length the same as its width. He measured the city with his measuring rod, and the result was that its length and width and height are equal: 1,444 miles, a perfect cube. 17 And my guide measured the wall; it was nearly 72 yards high, in human measurements, which was the instrument the guide was using. 18 The wall was made of jasper, while the city itself was made of pure gold, yet it was as clear as glass. 19 The foundation stones of the wall of the city were decorated with every kind of jewel: the first was jasper, the second sapphire, the third agate, the fourth emerald, 20 the fifth onyx, the sixth carnelian, the seventh chrysolite, the eighth beryl, the ninth topaz, the tenth chrysoprase, the eleventh jacinth, the twelfth amethyst. 21 The twelve gates were twelve pearls, each gate expertly crafted from a single beautiful pearl. And the city street was pure gold, yet it was as transparent as glass.

22 And in the city, I found no temple because the Lord God, the All Powerful, and the Lamb are the temple. 23 And in the city, there is no need for the sun to light the day or moon the night because the resplendent glory of the Lord provides the city with warm, beautiful light and the Lamb illumines every corner of the new Jerusalem. 24 And all peoples of all the nations will walk by its unfailing light, and the rulers of the earth will stream into the city bringing with them the symbols of their grandeur and power. 25 During the day, its gates will not be closed; the darkness of night will never settle in. 26 The glory and grandeur of the nations will be on display there, carried to the holy city by people from every corner of the world. 27 Nothing that defiles or is defiled can enter into its glorious gates. Those who practice sacrilege or deception will never walk its streets. Only those whose names are written in the Lamb’s book of life can enter.

22:1 My heavenly guide brought me to the river of pure living waters, shimmering as brilliantly as crystal. It flowed out from the throne of God and of the Lamb, 2 flowing down the middle and dividing the street of the holy city. On each bank of the river stood the tree of life, firmly planted, bearing twelve kinds of fruit and producing its sweet crop every month throughout the year. And the soothing leaves that grew on the tree of life provided precious healing for the nations.

3 No one or nothing will labor under any curse any longer. And the throne of God and of the Lamb will sit prominently in the city. God’s servants will continually serve and worship Him. 4 They will be able to look upon His face, and His name will be written on their foreheads. 5 Darkness will never again fall on this city. They will not require the light of a lamp or of the sun because the Lord God will be their illumination. By His light, they will reign throughout the ages." (Revelation 21:10-22:4)