The message of the cross

The cross--an instrument of execution that was so intense a word was invented just to describe the pain: excruciating. It was a humiliating, agonizing way to die, hanging there exposed to everything and everyone, your death long and drawn out and on display for the jeering crowd.

What a terrible way for an innocent man to die.

Add to that the taunting and torture Jesus experienced before His death--lashes so severe they often left the victim dead simply because the body can't recover from the combination of shock and blood loss. Slaps and curses and a crown of thorns from Roman soldiers. Struggling to carry a cross down the same streets where, just days before, people had shouted praises and thrown their cloaks down before Him as He entered the city. Looking out at faces full of hatred, at people demanding His life. And on the other faces, fear and confusion as they tried to reconcile this broken, bleeding man with the idea of the conqueror who would save God's people from the cruelty of a foreign ruler.

He hung on the cross hearing people yell out in anger and disappointment that if He was really so special, really a savior, why couldn't He just save Himself and get down off the cross? In the midst of all that, He looked out at the crowd demanding His final breath and used that breath to cry out for God to forgive them.

John 1 talks about "Logos," which most of the time is translated as "the word." As is so often the case, though, the English translation falls short of the true meaning of the Greek. From what I've found, "Logos" is more along the lines of the reason or the plan behind everything: "the divine reason implicit in the cosmos, ordering it and giving it form and meaning" (from britiannica.com). As you read on in John 1, you see that "logos" is used in reference to Jesus (translated as the Voice in this version):


"Before time itself was measured, the Voice was speaking.
The Voice was and is God.
This celestial Word remained ever present with the Creator;
His speech shaped the entire cosmos.
Immersed in the practice of creating,
all things that exist were birthed in Him.
His breath filled all things with a living, breathing light--
a light that thrives in the depths of darkness,
blazes through murky bottoms.
It cannot and will not be quenched.
[...]
He entered our world, a world He made,
yet the world did not recognize Him.
Even though He came to His own people,
they refused to listen and receive Him.
[...]
The Voice took on flesh and became human
and chose to live alongside us.
We have seen Him, enveloped in undeniable splendor--
the one true Son of the Father--
evidenced in the perfect balance of grace and truth."
John 1:1-5,10&11, 14

"This is the One who--imprinted with God's image, shimmering with His glory--
sustains all that exists through the power of His word.
He was seated at the right of God once He Himself had made the offering
that purified us from all our sins."
Hebrews 1:3

And in Colossians, Paul wrote:

"It was by Him that everything was created:
the heavens, the earth, all things within and upon them,
all things seen and unseen, thrones and dominions,
spiritual powers and authorities.
Every detail was crafted through His design,
by His own hands, and for His purposes.
He has always been!
It is His hand that holds everything together."
Colossians 1:16&17

The ultimate power in the universe--the One who holds everything together, who provides the force that holds protons together in the nucleus--let Himself be beaten and humiliated.

"But He was hurt because of us; our wrongdoing wounded and crushed Him.
He endured the breaking that made us whole."
Isaiah 53:5

He allowed His hands to be nailed to a cross:

He held back His power while people mocked Him, telling Him that if He were truly powerful He could get down from the cross:

"In the same way, the Son of Man must be lifted;
then all those who believe in Him will experience everlasting life."
John 1:14-15

He hung there--despised, mocked, and rejected--so that He would know our fears and our pains, so He would be able to understand what it means to feel forsaken:

"My God, my God, why have You turned Your back on me?
Your eras are deaf to My groans.
O my God, I cry all day and You are silent;
my tears in the night bring no relief.
Still, You are holy;
You make Your home on the praises of Israel."
Psalm 22:1-3

Though the people were blinded, all of creation cried out when Logos drew His final breath. The sky turned dark in the middle of the day and the earth shook.

The cross seems like such a strange, foolish instrument to use for the salvation of souls. If we look deeper, though, we can see just what it meant for Jesus to allow Himself to die on it. He set His power aside as the ultimate act of love and mercy, His life laid down in exchange for ours, and His reason is summed up by what He told Pilate:

"For this I have been born, and for this I have come into the cosmos:
to demonstrate the power of truth.
Everyone who seeks truth hears My voice."
John 18:37b
at April 20, 2020 No comments:

There's no doubt that we are in a strange time right now (though the difference is more pronounced in some places than in others). Outside there seems to be a hush, as if all of creation is holding its breath.

It's the beginning of Holy Week, but it isn't unfolding the way so many of us expected. For us, today was going to be the day our church family joined together to commemorate the Passover--though I'm sure it would have looked very different from the dinner Jesus shared with His disciples.

If we look back, God so often works in the unexpected. Take today--Palm Sunday. The people of Israel were looking for the Messiah, the Liberating King who would free them from Roman oppression. They were looking for the Conqueror, the Lion of Judah who would rise up and establish the kingdom. They had started to follow this Jesus, a powerful miracle worker who could cast out demons. They were likely recalling the words of the prophets:

"The Eternal is on my side, a champion for my cause;
so when I look at those who hate me,
victory will be in sight."
Psalm 118:7

So when they heard that Jesus was coming to Jerusalem just before Passover, the time set aside each year to remember how God had brought them out of Egypt and delivered them from generations of slavery, they just knew they were welcoming the conquering king. They met Him with songs and celebration: "Hosanna to the One who comes in the name of the Eternal!" They waved their cloaks and palm leaves, laying them out on the road as they would to greet a triumphant king traveling with his entourage. 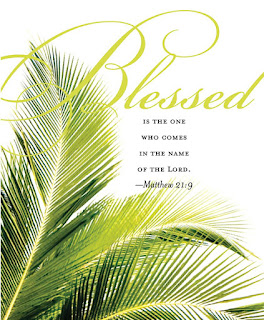 Only, this King didn't look like they expected. Maybe in that moment some of them recalled more of Zechariah's words:


"He comes seated humbly on a donkey,
on a colt, a foal of a donkey."
Zechariah 9:9b

Or the words of Isaiah:


"Out of emptiness He came, like a tender shoot from rock-hard ground.
He didn't look like anything or anyone of consequence--
He had no physical beauty to attract our attention."
Isaiah 52:2

The people expected a Righteous Conqueror to come in, rise up, and establish His throne by driving out the Romans. Instead, Jesus rode into Jerusalem on a young donkey, surrounded by children singing songs (Matthew 21), and only raised His hand when He drove people out of the temple for turning His Father's house into something that had been twisted from its true purpose.

They expected a rebellion, yet by then end of the week they saw Jesus crucified.

It may be a bit blunt, but God doesn't care about our expectations. In fact, Paul takes it a step further and tells us that God uses what the world sees as foolishness to confound the wisdom of those we see as wise (1 Corinthians 1). He takes our plans and actions in stride as He makes sure His plan is being carried out, something we can see even in the songs the people were singing as Jesus entered the city.

That verse is pulled from Psalm 118:26, but here are some others from the same chapter:


"The stone that the builders rejected
has become the very stone that holds together the entire foundation."
v. 22

"Let the feast begin. Bring the sacrifice"
from v. 27

This year's Holy Week doesn't look like we had planned.
Despite that, it isn't any less holy. I might even venture to say that because of it, we can see this week for what it is. I think God is waiting for us here in the unexpected, knowing this is how things would work out, knowing how far His creation would fall, and knowing how we would need to be reminded of Him. So my prayer for all of us is that we'll use this unplanned quiet of Holy Week to draw close to Him--the Lion of Judah who could have come as the Conquering King but instead offered Himself up as the Sacrificial Lamb.