I have to say, I love our little church. We're a small group, one in which everyone is considered family. I love these people more than I can explain, and I trust each one of them without doubt.

One of the most amazing things about our group, for me, is that our Sunday mornings are open discussions, and nothing's off topic. Right now, we're working our way through the Bible for the second time. Our first time through took about 3 years.

We just passed the 1-year mark at the beginning of this month--and we just wrapped up II Samuel yesterday. 10 books down...55 to go. I'm thinking this time through might take longer than 3 years.

On that note, yesterday Pop said that David is painted in two very different lights in the scriptures: saint and scoundrel.

We're all familiar with the stories that show him as a saint. He was, after all, anointed as the future King of Israel while he was still just a boy, watching over the sheep in his dad's fields. He faced a giant when everyone else was too scared, going up against Goliath with a sling and the knowledge that God would fight for him. He unified Israel, conquered Jerusalem, defeated the Philistines, and was the start of a dynasty. He was a warrior, a poet, and a musician whose words are known throughout the world. 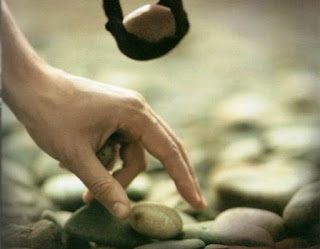 Equally present, though, are the stories that show him as a scoundrel. His lust for Bathsheba resulted in an illegitimate child (who later died) and in David plotting the death of Bathsheba's husband. His parenting left a lot to be desired; one son killed the other for raping their sister, and then tried to take over the kingdom. That same son, who happened to be David's favorite, was murdered. His pride and disobedience resulted in 70,000 people dying.

On a side note, there are a lot of lovely stories in the Bible...yikes.

In the light of all that craziness, how in the world could David be called a man after God's own heart? With a list of sins like David's--honestly, he covered most of the 10 commandments--shouldn't he be on the list of people we shouldn't want to be like?

It's easy to keep score and weigh someone's good qualities and successes against the bad stuff. Then, if all the good stuff tips the scale we decide that they must be a good person. Those are the people who never break the 10 commandments--or at least, they don't break the "important" ones. 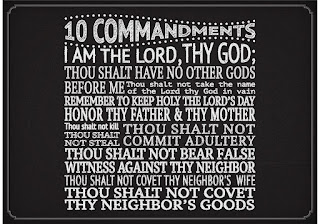 It's really not that hard to see that David's "bads" weighed pretty heavily against his "goods." By human standards, things like adultery and murder should probably knock him out of the running for the title of "godly man." Thankfully for David, though, that's not what God sees.

Here's the thing. God's scale takes everything we've ever done, good or bad, and puts it on one side. All of that--

all the times we lied or dishonored our parents or used God's name in a way that wasn't meant to honor Him or wanted something that wasn't ours or put the pursuit of something before our pursuit of God (what, are those not the "big" sins you were thinking about?)

All He cares about?

If I admit that I'm a sinner and accept that Christ died to pay the price for my sins.

That outweighs everything else.


***
If you're within driving distance, come visit us Sunday mornings! We have breakfast and coffee ready at 10:15 or so. Living Word Fellowship is across from the sale barn in Green Forest, AR.

Throwing pottery is something I thought I wanted to try once. Once is the key word there--Raiden got a kid's pottery wheel, and I tried to use it. I can't even begin to tell you the mess I made. Wet clay spinning around in a circle seems to have a mind of its own. I tried to make a simple pot; nothing fancy, just something small that actually looked like a bowl or something recognizable. What I ended up with was nothing more than a mess, and I'm pretty sure I had more clay on myself than actually stayed on the wheel.

Left to me, the clay was less useful than it would have been if I had left if as a lump. At least then it could have been a paperweight or something. In the hands of a Master Potter, though, clay can become some pretty magnificent things.


"The Lord gave another message to Jeremiah.
He said, 'Go down to the potter’s shop, and I will speak to you there.'
So I did as he told me and found the potter working at his wheel.
But the jar he was making did not turn out as he had hoped,
so he crushed it into a lump of clay again and started over.
Then the Lord gave me this message:
'O Israel, can I not do to you as this potter has done to his clay?
As the clay is in the potter’s hand, so are you in my hand.'"
Jeremiah 18:1-6


This is one of quite a few times that we are referred to as the clay when God is the Potter. Honestly, it isn't the prettiest picture if you go back and read it again. The potter was making a jar, and he didn't like how it was turning out. So he lovingly, patiently, gently worked with the jar, letting it dictate what it should become and following along.

Oh wait--that's not what that says.

Instead, he crushed it. He took the beginnings of a jar and he turned back into a lump.

Here's another passage that kind of steps on my toes:

How bad it will be for anyone who disputes with the very One who created him!
After all, a human being is nothing more than one clay pot among many.
Imagine the clay saying to the potter, “What do you think you’re doing?”
or “You don’t have the hands for this.”
Isaiah 45:9

I don't know about you, but I'm not necessarily a fan of the verses that step on my toes like this. You see, I have a tendency to tell God how I think things should go. I'm really good about it--I lay out the full plan so He can see just exactly how to best get things done, because obviously I know what's best for my life.

And that's typically when I get squeezed back down into a lump of clay.

That last passage is one that I find myself saying so much that I have God's reply written on a notecard that stays in my wallet:

"So the Eternal One, who is the Holy One and Maker of Israel, says,
'Are you really going to question Me about what will happen to My children,
or lecture Me about what I should do with the ones I made with My own hands?
It is I who made the very ground on which you stand,
I who shaped the human beings who walk around on it.
I pulled the sky and heavens taut with My own hands,
and organized the army of stars that march across the night sky.'"
Isaiah 45:11&12

I have no doubt that God created the universe. Studying physics has left me nothing short of amazed at just what it means for God to have spoken everything into existence. The little bit that I understand gives me a hint of just how incredible it is that God set all those rules and principles into motion.

Why, then, is it so hard for me to trust that He can shape my life the right way? Why do I have the crazy thought that I should be telling God what to do with me? Am I more complicated than the laws that govern the universe? In light of what He has created and controlled and accomplished, do I really think that He's going to mess up when it comes to me?

I'm slowly learning to stop trying to control everything. I'm still not very good at the "letting go" thing, but I'm working on it...and for the days when I find myself trying to tell God what to do with my life and my future, I pull out my notecard and read His response. Then I look around me and think about all the amazing ways that He works...and remember that I'm really not all that complicated to Him.


Many find me a mystery,
but You are my rock and my shelter—my soul’s asylum.
Psalm 71:7 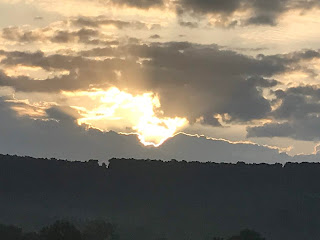