...you of little faith

The first time I ever remember Pop getting mad at me, I was sitting in a tree. I can't tell you exactly how old I was, but it was early elementary school some time. I was on a limb, wanting to get down, so Pop reached up for me and told me to jump.

He kept telling me to jump, assuring me that he would catch me--I had nothing to worry about. All I needed to do was let go of the limb and push myself forward. Instead, I was in tears, sitting in a tree. No matter how many times Pop assured me that he would catch me, I couldn't do it. He had never let me down, never given me a reason to think he would let me fall.

I couldn't just trust him.

Trust. That's something I still struggle with, despite all my efforts. I know that God is worthy of my trust. I know His promises are true, and that when His word says that He guides my steps--well, that's true, too.

The problem is, I just can't get my feelings to line up with my knowledge.

We just finished talking about Joseph at church. A few years ago, Pop sent me a sermon series by Tony Evans about Joseph called "Detours to Destiny." It was 2014, and I felt lost. Grad school wasn't going according to the way I had planned. I felt like somehow I had messed up God's plans for me, and I was going to miss out on His purpose. I felt like a huge failure. I had uprooted my family and moved them to Toledo, Ohio, to pursue what I thought was God's clear plan for my life. I was going into Medical Physics, which seemed like the perfect fit for me.

Until life happened, and I couldn't make myself fit.

I can look back throughout my life and see how God has worked, even in the hard times. I can see how things that I thought were going all wrong worked out to put me right where I should be at the right time.

So why in the world do I still think I'm messing up God's plans?

There's a quote I ran across a while back:

"If you think you've blown God's plan for your life, rest in this.
You, my beautiful friend, are not that powerful."
~Lisa Bevere

When Joseph's brothers decided to sell him off into slavery, they were pretty sure they were keeping him from a destiny they didn't like. They didn't want to bow down before their little brother. They sold him off, and that was the end of things.
Here's an excerpt of the post I wrote when I finished listening to that sermon series:

God works out all the details of our lives, even when we can't figure out what's going on. Proverbs 16:9 says,
"We can make our plans,
but the LORD determines our steps."

I don't know why trust is such a hard thing for me. I get so hung up on trying to control my life, and I forget that control is just an illusion. I make plan after plan, searching for purpose, but I lose sight of the fact that God is the only One in control. He has a plan for me, and who am I to think that I can change that?

"So it is when I declare something.
My word will go out and not return to Me empty,
but it will do what I wanted;
it will accomplish what I determined."
~Isaiah 55:11

I wonder how often He looks at me, shakes His head, and says, "You of little faith. Why can't you just trust me? Why do you always try so hard to control everything, despite all the times I've shown you that you can't? When are you going to learn that My plans are best for your life, and I will make them happen? Just jump when I tell you to, and trust Me to catch you."
at September 28, 2018 No comments:

"Those who trust in their wealth are headed for great disappointment,
but those who do right will sprout like green leaves in the spring."
Proverbs 11:28

Spring doesn't last forever. Life isn't always full of cool breezes, bright sunshine, and new flowers. Instead, spring only comes after the winter. New life only follows after the old life has died. Green leaves come after the cold winds, after the trees have had to stand against the barren winter.

Too often, it seems people think the Christian life should be one of ease and comfort. We have the thought that God's promises mean that our reward starts here and now--our work should pay off and our every effort should be blessed. We even hear it preached--God wants us healthy, wealthy, and wise. It's the prosperity gospel in a nutshell.

Yes, we are promised new life--but that only comes after the old life has died. We are promised the spring, but that doesn't mean that we won't have to face the winter. Sometimes the circumstances of our lives become cold, harsh, and barren. We watch as everything dies around us: finances crumble, relationships become strained, dreams fade. The "winters" in our lives are hard, lonely times.

But we aren't alone in that. We are called to live a life modeled after Christ, so why are we surprised by the winter? Jesus faced a winter in His life that most of us can't even fathom. He was betrayed and abandoned by those closest to Him. He was beaten, mocked, and spit on. He faced the agony of the cross, even though He could have stopped the pain and suffering in a heartbeat. He was buried in a borrowed tomb--He didn't have a home of His own, let alone a burial place. He faced a winter so bleak that Creation was plunged into darkness in the middle of the day as a result.

For some of us, our spring will start on this side of death. Some will get to see the end of the cold, harsh winter and the blooming of new lives. Some will see earthly prosperity and the wonder of dreams fulfilled. For others, spring may come like it did for Christ--on the other side of an earthly death. Either way, God's promise is the same.

...those who do right will sprout like green leaves in the spring. 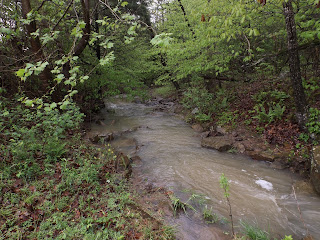 Grief is a funny thing sometimes. This year was the first year I wasn't in classes on the anniversary of Michael's death. I thought that was going to make it really hard--I wouldn't have anything to distract me, and usually that means my mind goes into overdrive. The thing is, that didn't really happen.

I have to admit, it felt a little strange when I thought about it. I felt a little guilty, to be honest, because it was almost as if that day came and went without the memory of Michael's death bothering me. And then my thinking changed--maybe it was a good thing. Maybe I was learning how to deal with the loss (after 14 years...I know that may sound crazy, but it really is just a start for me, even after all this time).

So that was a Wednesday.

Sunday rolled around, and I wasn't thinking about anything that had to do with August 15th. It was a normal Sunday morning at church. We started with coffee, breakfast, and doughnuts while everyone sat around and talked about how life is going. I have to tell you, I really love my church family. We are a small group (around 20 people), and that lets us all dig deep into each other's lives. Our mornings start with everyone sitting around the table, just talking about anything and everything that is happening.

During the first medley we sang, a specific song caught me off guard. It wasn't a sad song--but all of a sudden I was choked up and couldn't sing. What, you may ask, was the song that suddenly ripped my heart up into my throat and made the tears well up in my eyes?

Leaning on the Everlasting Arms. I know--a real tear-jerker, right?

The thing is, when we were teenagers sitting in the pew and singing that song, Michael and I would lean against each other (maybe that should say "push against each other with our shoulders but pretend we were just leaning") every time the word "leaning" came up.

So there I was, choked up over a song and the memory it stirred up.

And remember, this is 14 years after the fact.

I'm part of a Gold Star Siblings group on facebook, and the other day someone posted something that broke my heart a bit. She was talking about the loss of her sister, who will be gone for a year this December. Read that again--1 year this December. She was worried because she's still having a hard time dealing with this loss, and the rest of the world seems to think she should be "over it" by now.

A relationship with a sibling is something no one else really understands...and as a result, the loss of a sibling fits into that same category. It isn't something you "get over," especially in less than a year. My goodness, 14 years later a simple song still brings me to tears (and that's not even talking about the songs I still can't listen to in public). If you've lost someone, please hear me: you don't have to be "over it" in any arbitrary amount of time.