life lesson from the check-out line

A while back, I was in line at Wal-Mart. I was in the express line, picking up something in between classes way back when I was working towards Medical Physics (or not so long ago...I guess it just seems like my many different educational paths should be more spread out than they are). There was an older gentleman in front of me, actually having a conversation with the cashier.

Having worked as a Wal-Mart cashier, I can tell you that someone carrying on a conversation with the cashier is a pretty rare occurrence.

I don't know what they were talking about; I was trying not to eavesdrop despite how much I like to people watch. I like to call it research for writing--it sounds a lot less creepy when I put it that way. Before he paid his bill, though, he turned to me. He told me that he had always lived a very fulfilling life, and he said that the reason for that was in his two hands. I could tell he was leading up to something, and I wasn't in a hurry so I bit: "What's the reason?"

"Hold your hands up like this," he said, putting both hands up in front of him. I did what he asked. There was nobody in line behind me, and I was curious. The cashier had a knowing look on her face, so I imagine she had gotten his life lesson in the past. She just smiled and watched as he went on.

His voice was slightly accented, though I couldn't place where he might have been from originally. He reached out with one life-worn hand and grabbed the tip of each finger, one at a time, assigning one word to each one:
If
it
is
to
be,
it
is
up
to
me.
"I say that every morning when I get up, as a reminder to myself," he said, then wished me and the cashier both a good day and went on his way.

His words have stuck with me, though I've tweaked the meaning a bit. I'm reminded of the picture we have in our living room: 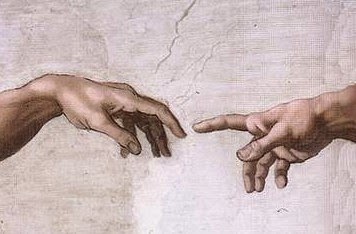 Two hands, Adam reaching out to touch the hand of God while God reaches back. When I see that picture, I think of that man's words and the reason he said he had lived a fulfilling life. I see that my hands have to be active, reaching out. If I want something to happen, I need to take action to make it happen. Most importantly, though, I need to be reaching out to God. Because
if
it
is
to
be,
it
is
up
to
Him.

Email ThisBlogThis!Share to TwitterShare to FacebookShare to Pinterest
Labels: Christmas, lessons, me, story

the right place at the right time...

Can I tell you how scary that word is to me? It definitely wasn't my pick--kind of like when this blog started with the word faithful. As I've mentioned lots of times (and I apologize if I sound like a broken record), trust doesn't come easily to me. It means I have to rely on someone else...someone who isn't me.

That's hard to swallow.
I've always wanted to do things myself, a trait that started when I was little and hasn't stopped. I've wanted to earn things by my own merit, to accomplish things using my own hands and through my own power.

I listened to the last of a sermon series by Tony Evans the other day, and in it he was wrapping up Joseph's story. He pointed out that Joseph didn't have any qualifications or connections, and that lots of people would say that he ended up in the position to provide food for his brothers and their families because he just happened to be in the right place at the right time.

Right now, things are a bit stressful in my household. Nathan and I are both wrapping up grad school, but we have no idea where we are going when this summer rolls around. I've been more than a bit worried about it, even though I've been trying not to get too stressed out. When I was listening to the end of the story of Joseph's life, I was reminded of something: when I got the job teaching at Lead Hill, it was through nothing I did. I didn't even know there was a job opening there. I hadn't applied; I got a call one day asking if I would be interested in coming in for an interview.

I say that to say this: when I look back at my life, it's full of times when I couldn't control what was happening and thought things were spinning out of control. Through all of it, though, even the times that others meant for evil, I can see how God worked in the middle of it to bring about His purpose. If He has done that time and time again (without my help, I have to admit), what's to keep Him from doing it now?

Trust.
It's a hard, beautiful thing.

I know I'm a little bit late...sorry about that. In fact, I haven't posted anything since the middle of November--so I guess I'll say sorry for that, too, because two months is a long time to go without writing anything on here.

There's a good reason for about a month of my silence, because my parents brought us home for Christmas so I was away from the computer. Here's a glimpse of what my time there was like: I would like to say that that's my only reason for not writing lately. The thing is, there's this little matter of promising to be honest, faithful, and transparent when I write here.

So I have to admit--I haven't written because I feel like I've lost my voice. For so long, writing has been the one thing I've been able to do without fail. No matter what chaos or confusion was swimming around in my mind, I could pick up a pen and get everything out. Even though it didn't change anything, just being able to put my thoughts into words somehow made things better. No matter what I was facing (and there's been quite a mess of stuff), I could write about it and make some sense of things. Lately, though, that hasn't been the case.

Am I alone in this? Do you ever feel disconnected from the things that have always made you who you are? No matter what else I have ever faced--teaching, physics, teenage angst, moves, grad school, being a wife and mom--writing has always been part of the very fabric of who I am. In fact, it has often been what held everything else together. It's hard when you feel like you're coming apart at the seams and have lost your needle and thread.

I'm reminded of Proverbs 3:5&6, verses that are probably familiar:

"Trust in the LORD with all your heart
and lean not on your own understanding;
in all your ways acknowledge Him,
and He will direct your paths."

Maybe I'm looking for the wrong needle and thread. Instead of looking to something to do on my own to try to pull myself back together, I need to trust.

Trust the One who holds me together, who doesn't need needle and thread to fix the seams because He's the One who knit me together in the first place.

Huh. Funny how that works--I didn't plan on taking part in the whole One Word thing this year, because I was at a loss for what word to choose. As I've found so many times, though, when I get out of the way God has a way of speaking to me, of letting me know what it is He's trying to get across to me. Apparently this year, He snuck a word in:
Trust.
What a perfect word for a year that promises to be full of changes and unknowns, a year of new beginnings and a move, the end of a chapter (grad school) and the start of a new one, and the next 6 months where so much has to happen in what is truthfully such a short time. It's not an easy word for me. I'm probably starting to sound like a broken record, but I don't like to rely on other people. I have a hard time with it, to be honest, because it means having to admit that I'm not in control. This year may prove difficult for that very reason.

You would think that I would be used to that by now. After all, there's been very little I've actually been in control of for the past decade. Sometimes I'm a bit slow on the uptake, I guess. At times, it takes a 2x4 for lessons to sink in.

So this year, I'm going to try to trust.
Just now, when that word came into my head, I looked up "trust" in the back of my Bible and here's what I found:
"The LORD is a refuge for the oppressed,
a stronghold in times of trouble.
Those who know Your name will trust in You,
for You, LORD, have never forsaken those who seek You."
Psalm 9:9-10