Anymore when I look at the world we're living in today, I don't recognize it.

What happened to right and truth versus wrong and falsehood? There used to be clear distinctions between the two, but today instead there seems to be some sort of sliding scale. Or even worse, there's the idea of "whatever works for you--each person has his own truth."

The problem with that is that there is only one Truth.

In John 14:6, Jesus said, "I am the way and the truth and the life. No one comes to the Father except through me."

But somehow, even Jesus is being used to push a certain "progressive" train of thought, one which usually revolves around being politically correct. In that ideology, we as Christians shouldn't be speaking out against things because that isn't being loving. We are told that we are being judgmental and turning people away when we take a stand.

The idea that we should be politically correct is even being preached from some pulpits today.

So that begs the question, would Jesus be concerned with being politically correct?

While it's true that we have accounts of Jesus being followed by greats crowds of people who wanted to listen to His teachings, we are also told numerous times that there were mobs who wanted to kill Him--and they eventually did kill Him.

At one point, Jesus made a whip to drive people out of the temple for defiling it by selling animals and changing money.

Another time, He told the Pharisees that they were hypocrites, blind guides, whitewashed tombs, and a brood of vipers.

While some would argue that being against the hypocritical Pharisees is what political correctness is all about, I disagree.

The hypocritical Pharisees of old were men who thought they were better than everyone else because they were somehow more holy, more deserving. Today's hypocrites are those calling out their own superiority based on their lack of religion--or their religion of total inclusion with no mention of Truth or sin. They are those who claim to be calling for peace and acceptance while instead creating hatred and division by saying that we have no right to stand up for our own beliefs--we're just supposed to accept and fall in line with society's views.

Don't get me wrong, I fully believe that God loves and accepts each of us. Romans 5:8 tells us, "But God demonstrates His own love for us in this: While we were still sinners, Christ died for us." His death was His gift to us, given solely in grace. It was given freely to all of us, no matter how long a list of sins we had.

But then He says what my Momma always said, "I love you too much to let you act that way."

Jesus died for us while we were sinners, but He did not intend for us to stay in our sin.

A little bit later in Romans 6, we read that when we believe that Christ died on the cross for our sins, that means we join in His death to sin and His resurrection to a new life. Though we were once slaves to sin, belief in Christ makes us slaves to Him. "What shall we say, then? Shall we go on sinning so that grace may increase? By no means! We died to sin; how can we live in it any longer?"

Jesus wasn't worried about being politically correct because He was too busy teaching the hard lessons that a lot of people really didn't want to hear. Most people know John 3:16 without really even having to think about it: "For God so loved the world that He gave His one and only Son, that whoever believes in Him shall not perish but have eternal life."

What about the rest of His words to Nicodemus (a member of the Jewish ruling council, by the way) that night?

"For God did not send His Son into the world to condemn the world, but to save the world through Him. Whoever believes in Him is not condemned, but whoever does not believe stands condemned already because he has not believed in the name of God's one and only Son. This is the verdict: Light has come into the world, but men loved darkness instead of light because their deeds were evil. Everyone who does evil hates the light, and will not come into the light for fear that his deeds will be exposed. But whoever lives by the truth comes into the light, so that it may be seen plainly that what he has done has been done through God." ~John 3:17-21

As followers of Christ, we need to step forward into the light. Our condemnation has been lifted, and we need to speak the truth so those around us--those lost in the dark and afraid of their deeds being exposed--can come into the light and no longer be condemned, slaves to sin.

We have the key to unlock the chains, so why in the world should we keep quiet about it in the name of being politically correct?

I don't know about you, but I'm more worried about being right with God than being politically correct. In today's world, you can't be both. We have to take a stand and speak love and truth, even though we will be hated for it.


"In the presence of God and of Christ Jesus,
who will judge the living and the dead,
and in view of His appearing and His kingdom,
I give you this charge:
Preach the Word;
be prepared in season and out of season;
correct, rebuke, and encourage--
with great patience and careful instruction.
For the time will come
when men will not put up with sound doctrine.
Instead,
to suit their own desires,
they will gather around them
a great number of teachers
to say what their itching ears want to hear.
They will turn their ears away from the truth
and turn aside to myths.
But you,
keep your head in all situations,
endure hardship,
do the work of an evangelist,
discharge all the duties of your ministry."
~II Timothy 4:1-5

Paths in the snow

Sometimes, I wish I was the type of person who could learn lessons from nice things, like a cup of coffee. You know, how some people look into a steaming cup of coffee and see lessons in the light creamer and dark coffee mixing together or in the sweet and bitter combining?

That would be nice, but apparently that's not how I learn things.

Instead, my lessons come in the form of shoveling snow when the temperature reads 1 degree Fahrenheit outside.

The kids had a 2 hour delay before school this morning because we've had quite a bit of snow the last few days. Nathan had already left, so I needed to clear a path for the kids to be able to walk out to the bus. I started on the steps, then all I had to do was follow the sidewalk. The first thing to throw off my progress was a decision when the sidewalk came to a T: right or left? Should the kids walk over to the driveway or up to the road? The driveway seemed like the obvious choice at first, partly due to the fact that I wouldn't have as much shoveling to do. The ice under the snow over there changed my mind, though. It would be nice to have a clear shot to the car when we needed it, but I could just see both kids falling flat if they went that way.

So, left. Okay, sounds like a good plan. The sidewalk that way leads straight up to the road, so it should be a straights shot.

The thing was, when I started going that direction I quickly lost track of the stone sidewalk. The snow was too deep for me to shovel down to the ground in the amount of time I had before I needed to get back inside to finish getting the kids ready for school. No big deal--I just needed to shovel a straight path up to the road for the kids to walk to the bus.

I was almost to the road when I looked behind me. Not only was I not on the stone sidewalk, I wasn't making a very straight path, either. 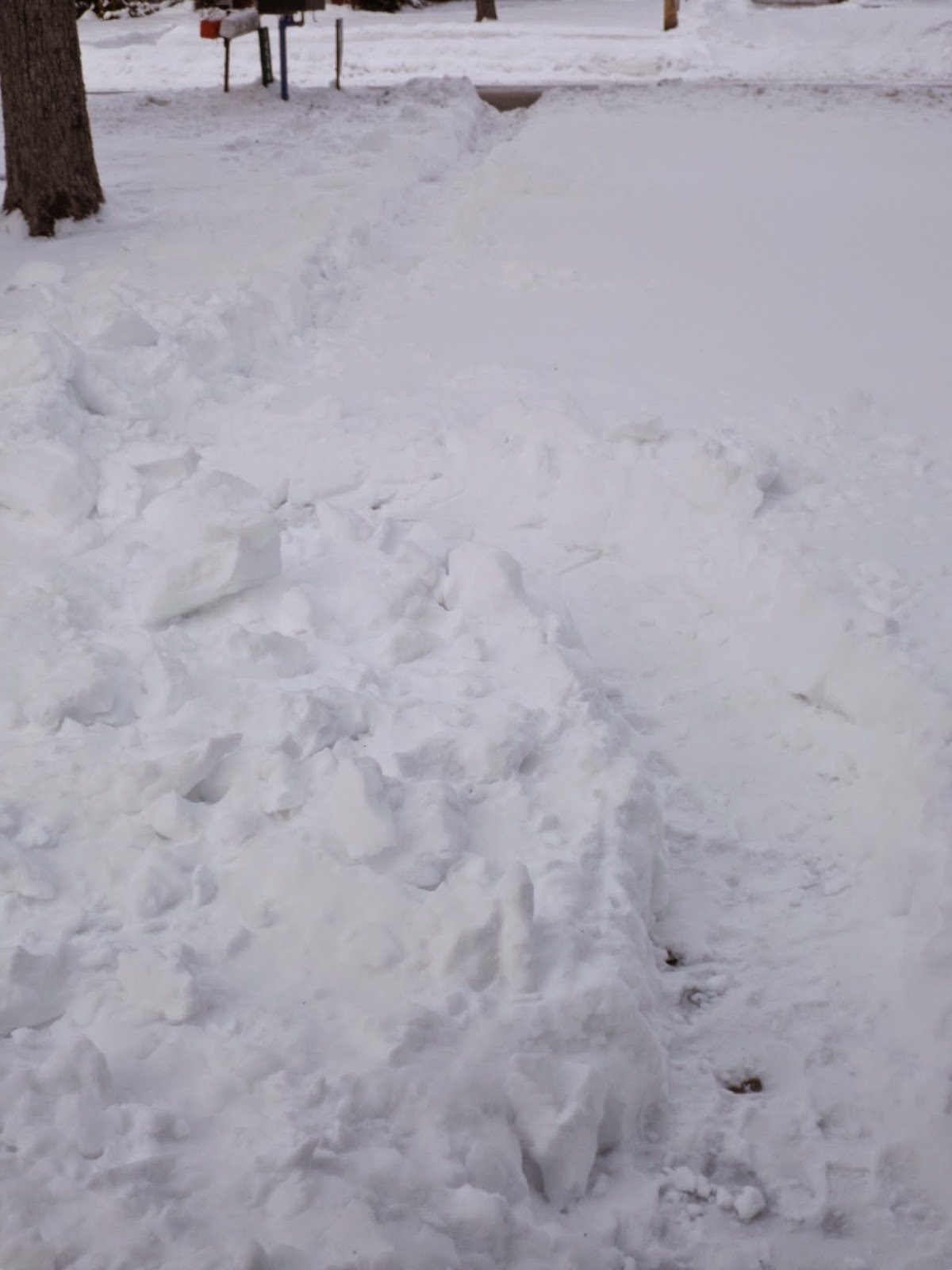 The path wasn't very straight, and it wasn't where I was planning for it to be. It would work, though; it was a path to take the kids from the front door out to the bus without them either getting their boots full of snow or having them fall on the ice. 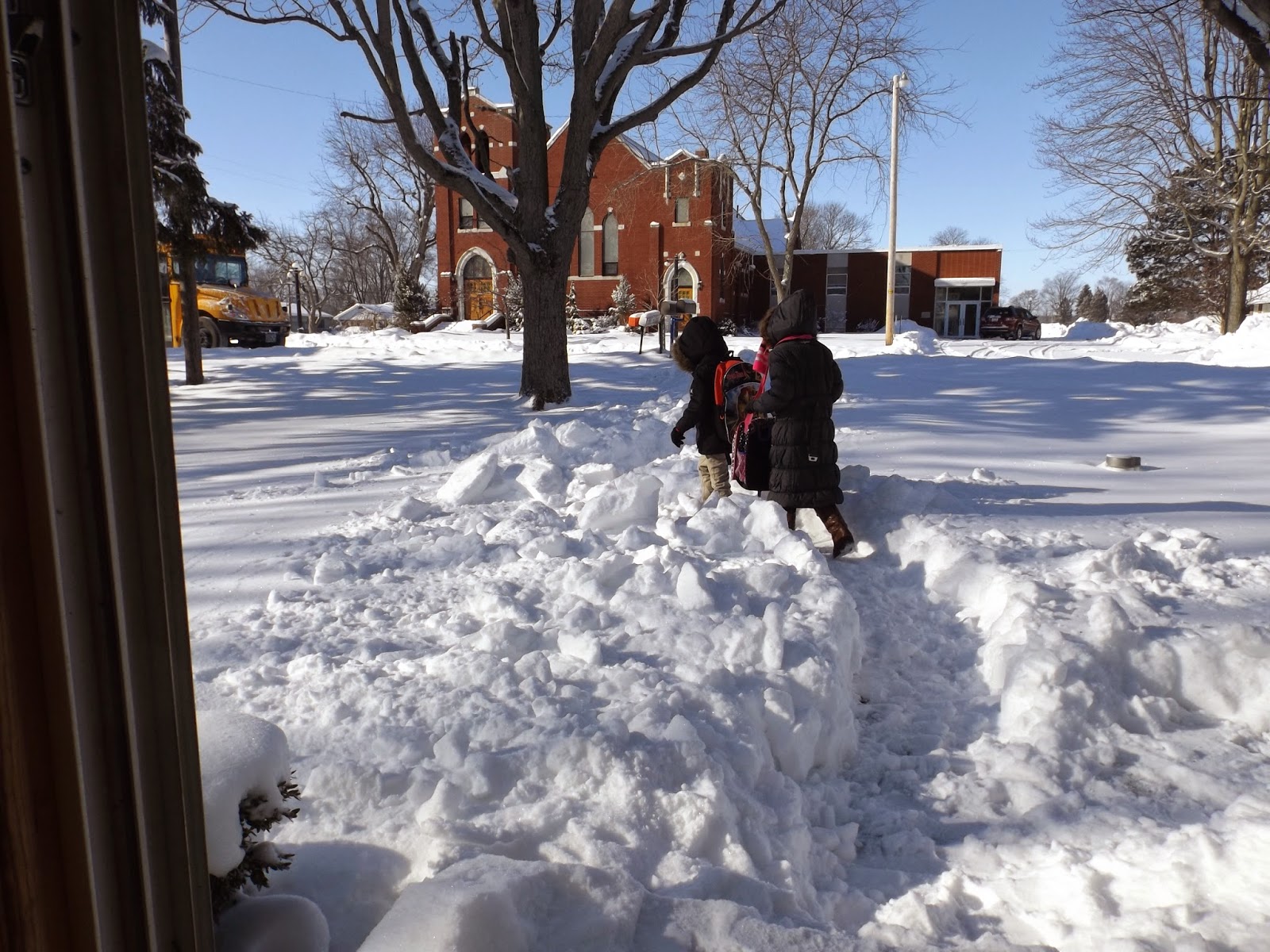 Right now, I have no idea where my path is headed. I've had many times when I thought I knew where the sidewalk was, where I knew what would be the best path. Instead, though, the path God has me on seems to be winding its way around so much that I can't even see where it's headed.

My kids didn't question the path I cleared for them. They simply walked it.

While it doesn't come easily to me, I'm trying to simply walk the path God is clearing for me.
at February 06, 2015 2 comments: