So, I did something hard yesterday--I visited the Pea Ridge Battlefield.

That may not sound hard to you, but for me it made my heart ache. Not just for the soldiers who fought and died on those grounds, though that in itself was enough to make my heart hurt.

No, it was hard for a whole other reason.
You see, my brother was a Civil War scholar. He studied the Civil War--reading books, taking part in reenactments, watching movies--basically anything he could get his hands on. I remember going to the Pea Ridge Battlefield when we were little. I remember going to reenactments, where Michael was adamant that his hardtack be authentic, where his haversack was hand-sewn, and where everyone was thrilled when someone mashed a finger in the cannon because that meant they could have real blood on their bandages.

I'm in Bentonville right now, wrapping up the last of my 3 weeks of teacher training. I spent the first 2 weeks in Pop & Mom's trailer, but this week I'm going all out and staying in our tent. And let met tell you, northwest Arkansas is hot right now. As a result, I'm taking some time after class gets out to go to antique stores in the area--I'm big on searching for treasures amidst all the junk! Yesterday, though, after I picked up 6 skeins of yarn for $4, I decided to do something else before I headed back to the tent. I decided to take my notebook and go sit at the battlefield and write.

The theory was, sitting at a battlefield while I wrote would help my mind operate in a different way. I'm working on The Darkness: Book 2 of the Sons of Tundyel. It's a sequel to The Prophecy, and this entire book is based around a battle with the Shadows and the Darkness.

As is common in my life, though, what sounded good in theory isn't what happened.

When I pulled into the parking lot, I was overwhelmed. That wasn't something I had expected. I took my notebook and pen and found a place to sit along the edge of the battlefield, at the treeline next to a split log fence. I pulled out my notebook, intent on shaking off the heaviness that was weighing down on me. I even opened my notebook and put my pen on the paper.

But I couldn't write.

My mind couldn't focus on what I wanted to write. Instead, I had a lump in my throat and couldn't get my mind off of my brother.

I could see him--us--little, visiting that battlefield. I could see him in his reenactment uniform, proud to be part of the unsullied Gray.

And I flipped my notebook open to the last page, one I'm pretty sure I won't get to with my story because I think there are 450 pages in this notebook.

And I poured my heart out onto the paper.

***
What's it like to lose your brother?
It's like having a piece of your soul cut out,
only to have people say, "That's alright--you'll live without it."
Sometimes it's like your lungs forget how to breathe,
or maybe it's just that they don't want to remember.
It's having people ask, "How are your parents?
This must be really hard on them," and wanting to scream,
"They aren't alone--I lost someone, too!
Someone who was part of the definition of what it meant to be me:
Oldest daughter, but middle child; 'Little Mike' at school.
Someone who taught me to throw a punch--and take one,
but who gave his little sister a valentine with the words
'Sometimes I may pick on you (just a little)
But you should know I still love you.'"

What's it like to lose your brother?
It's being thrust into the role of oldest child
with no earthly idea of how you're supposed to fill those shoes.
It's constantly living in a shadow others can't see,
but one that's so real you can feel it in your bones.
It's trying to decide if introductions are worth it
because people always ask, "How many siblings do you have?"
and the debate on how to answer isn't worth the effort:
"Do I say two? Because then they'll ask what they do
and the pity that follows 'He was killed in Iraq' is too much.
Or do I say one, and lie to make things easier?
Not easier on myself, because I'll be racked with guilt,
but easier on the person who didn't know where that question leads.
And nobody bargains for the painful silence." 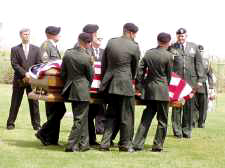 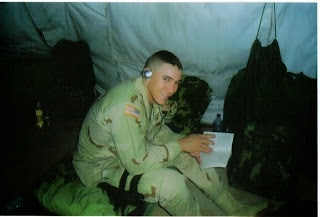 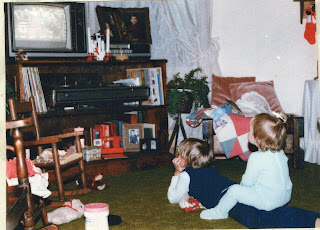