i just read this blog (thanks for posting it on facebook, Jill!). it made me smile, so i thought i would share it.

for anybody who doesn't want to take the time to click over to read the article, Lysa TerKeurst was talking a little bit about what it was like raising a daughter who doesn't necessarily go along with the norm...that's probably putting it nicely! 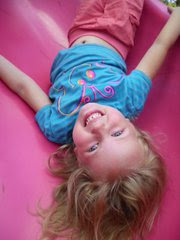 for anybody who has been around my little munchkin, you know that i've definitely been tasked with that same thing.


she exasperates me, frustrates me, terrifies me, and amazes me--and i wouldn't change her for the world.


there have been times when i've thought, desperate, that i wished she would just behave, just go along with the norm for a while. i've struggled with worrying about how people judge me as a parent when she's been a puppy at wal-mart or laid on the bottom rack of the cart at the grocery store.


i've watched her roll around at the park while other parents tell their kids, "we don't lay in the grass."

i've let her run out into the summer rain like this:


i've watched her play outside in a tutu, knee high striped socks, and high heels.


i've heard her (already, in pre-school) tell me she can't wear one of her favorite shirts because some other girl will make fun of her...then smiled the next day when she wore those striped socks pulled up over her purple pants...which were under a crocheted skirt...with a "drama queen" t-shirt.


we've had battles that make me wonder what her teen years will be like.
yikes!

for as long as she's been able to talk, she's asked hard questions about God that i didn't expect her to even think about for a few years.

she's had insights i never expected--
like asking me why God doesn't talk out loud to us like He did to moses. my "sunday school answer" about Him talking to our hearts wasn't enough. her answer to that? "i wish He would talk to me out loud, because it's hard to know what He wants when He's quiet," said with tears clouding her blue eyes.


she's strong willed
stubborn
hard-headed
she definitely isn't one to blend into the crowd, very much unlike her mom.


i've cried and prayed, wondering why in the world God gave me this wonderful, difficult little girl. how in the world am i going to raise a little girl who is so unlike me in so many ways?


at the same time, though, i have been so blessed by her.
you know what i think?
these traits, the ones that make her such a challenge right now (and i don't even want to try and imagine what those teen years i mentioned will be like), are the traits that i know will make her such an amazing child of God. her stubborn nature, the way she questions every rule, her wild passion for life--those are the things that are going to make her unstoppable.

i can't wait to see how God uses this crazy little girl in the future...