"And we know that in all things God works for the good of those who love Him, who have been called according to His purpose...What, then, shall we say in response to this? If God is for us, who can be against us?" (Romans 8:28 & 31)

These two verses seem to be favorites for a lot of people, and understandably so. Taken together, it seems people take these two verses to mean that everything will go smoothly for Christians. The flip side of that, then, is that if life is hard--
if things are going wrong
or falling apart
or disintegrating right before their eyes--
for someone who claims to be a Christian, then there must be something wrong in that person's spiritual life. After all, here in Romans we're told that God works things out for those who love Him, and that nobody can go against us if God is for us.

It would be really great if that were the case. I imagine it would be pretty easy to persuade others to become Christians then, too. If God's whole goal were to make us happy, to make sure everything rolled along splendidly for the people who love Him, and to stop anyone who dared oppose us, who wouldn't want to be a Christian?

To be honest, I wouldn't mind if Paul's letter to "all in Rome who are loved by God and called to be saints" (verse 1:7) had been made up entirely of those two verses. You know, he could have signed off with something along the lines of, "Love God and everything in life will fall nicely into place. You will be happy and healthy and never have to worry about a thing!"

It seems like that is the message many in the US hear preached from the pulpit each Sunday: God's whole purpose is to see us rich and comfortable. If we will do this whole "Christian" thing right, we will get everything we've ever dreamed of and all will be right with the world.

The truth is, though, that's now what we're promised. Even in that chapter in Romans, that isn't where Paul stopped. In fact, here's the note I have written in on that same page in my Bible, just a few verses down: 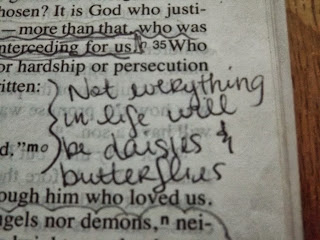 That note is next to verse 36, a quote from Psalm 44:22.
"For Your sake we face death all day long; we are considered as sheep to be slaughtered."

For understandable reasons, especially in a country like the US where we have been spoiled and don't have to worry about true persecution, verses like this tend to be ignored. I'll admit it doesn't seem like the most comforting of verses. The thing is, being a follower of Christ was never meant to be a comfortable thing.

"I have given them Your word and the world has hated them, for they are not of the world any more than I am of the world" (John 17:14)

"For there will be great distress, unequaled from the beginning of the world until now--and never to be equaled again." (Matthew 24:21)

"If anyone would come after Me, he must deny himself and take up his cross and follow Me." (Matthew 16:24)

"Then you will be handed over to be persecuted and put to death, and you will be hated by all nations because of Me." (Matthew 24:9)

"The apostles left the Sanhedrin, rejoicing because they had been counted worthy of suffering disgrace for the Name." (Acts 5:41)

Stephen was stoned to death, Paul was imprisoned and tortured (among other things), James was killed by Herod Agrippa. According to historians, the apostles suffered horribly for their faith.

Followers of the Way have, through the years,
been crucified
flayed
fed to animals
beheaded
tortured.

Today, those who follow Christ around the world are killed instead by bombs and bullets. Though not talked about by the US media, the attack in Kenya and the atrocities carried out on an almost daily basis in Egypt are aimed at Christians.

We were never promised that life would be easy, despite what is popularly preached here in the US. Actually, we are told pointblank that life will be hard and that we will be hated by the world.

The amazing thing, though?

"I have told you these things, so that in Me you may have peace. In this world you will have trouble. But take heart!

So jumping back to what Paul said in Romans:

"Who shall separate us from the love of Christ?
Shall trouble
or hardship
or persecution
or famine
or nakedness
or danger
or sword?
No, in all these things we are more than conquerors through Him who loved us.
For I am convinced
that neither death nor life,
neither angels nor demons,
neither the present nor the future,
nor any powers,
neither height nor depth,
nor anything else in all creation,
will be able to separate us from the love of God that is in Christ Jesus our Lord." (Romans 8:35, 37-39)

No, life isn't all butterflies and daisies.

But we serve a God who is powerful enough to hold onto us through everything, One who gives us the strength to be conquerors--no, more than conquerors--in the midst of unimaginable hardships. 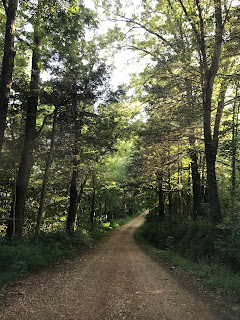